After a 1 day break of quality CS:GO and Fantasy tournaments on it I am happy that it continues today and I am sure many of you are as well, as it was a lot of fun to follow these games the last 2 weeks.

Today 3 matches of the CIS region and 4 games of Europe will be covered as the NA region is on a small break before the playoffs start. While the CIS groups just started and the teams are trying to find their ground Europe is getting close to the finish lines of the group stage. Almost every team can still qualify but almost every team can also fail to do it which leads to a lot of tension. Also the better the placement the more RMA points you get, which is what every team is here for: Points to qualify for the major in autumn.

The matchups today will be following: 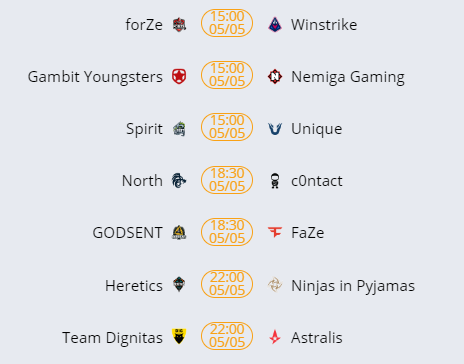 To make sure you can take advantage of this we looked out for the best value plays for under 11 million as usual.

The day starts with ForZe vs Winstrike. Although the odds are quite even I see Winstrike as the favorites here. While ForZe couldnt be in a worse form and comes of a streak of 0:2 losses Winstrike seems to be in their honeymoon period. With Winstrike being priced a bit cheaper than their opponent there is a lot on Value in Winstrike for me.

Bondik being the legend he still puts up great numbers in 2020 and feels like a solid member for your team who will put up 150 points for sure and could go up to 200 on a good day.

El1an and Hobbit on the other side are the flashy young guns with more points potential overall. In both matchups they played in Road to Rio until today Hobbit had one insane map which was the first in both occasions. If he is able to bring this form on 2 or 3 maps he could be an insane captain play with possible low ownage.As the star of the team El1an at only 10.3 million he is a no brainer for me as well, as stars of other teams are priced from 11 to 11,5 million a lot of times.

Another close game will hopefully be delivered by Nemiga vs Gambit Youngsters, at least the odds suggest so. The match is open for anyone in my opinion as well which is why I have potential picks of both sides of the matchup.

The rising star sh1ro is my favorite pick of this matchup. He showed what he is capable off in this last game but I predict him to do even better in a lose matchup.

On the Nemiga side the two heavy hitters are the ones taking my attention. Each lollipop21k and speed4k had one huge performance until now which I am looking forward to be replicated when I own them, potentially today. With prices at 10.6 and 10.3 they are great value plays, especially if Nemiga wins today.

At 18:30 CET the first two places of Europe’s Group B are having a battle for the first spot.

Even though they both are on the top 2 places, FaZe, yet to loose, is still the favorite by far.

The unbeaten run by FaZe is even more impressive as their star NiKo isn’t even carrying them as usual. With NiKo being quiet so far this has made up room for other stars which aren’t rare at FaZe. The brazilian coldzera, the best player of the world in 2015 and 2016 to his name has stepped into the shoes of NiKo and puts up insane numbers with an average of 209 points over 4 matches. With a price tag of 10.9 million he is still in our filters and could be a great captain today.

The newest addition broky is also surprising a lot of people this tournament. The sniper was sharing the lowest fragger spot with olofmeister before this tournament and is now putting up the second highest numbers so far. Although he got a lot more expensive already he is still a good play at 10.3 million.

With c0ntact already being confirmed out and North also being highly unlikely to qualify for the playoffs the next match is a weird one, which is why I wont pick many players from this match. North should be able to win this match which forced me to choose a player of them which isnt as easy as it sound, as literally everyone can be on the top of the scoreboard at the end of a game. If you believe in North feel free to go with whoever you want, but I decided to suggest aizy, simply as he has the highest ceiling of all of them.

At 22:00 CET Group A comes into play and in the first match the second place faces of against the second last place. The positions also represent the most likely outcome of this game which should be Astralis beating Dignitas easily. With Magisk underperforming since CS:GO was forced to be played out online most of the time and Device not putting up huge carry performances this leaves some room for the 3 lowest priced players.

The in game leader gla1ve already had two great performances with around 200 points. If he is able to replicate this he could be a wonderful pick.

Xyp9x being the second highest point scorer this tournament but being priced the second lowest explains the Value alone. You probably won’t see 250 points of him so I would play him as a captain but he is a really solid play comparing his performance to his price.

The third player is dupreeh who is priced at 10.6 million and is coming of a really strong game against Heretics which makes me also like him.

The last game has the just named Heretics facing of against the Swedes of NIP.

NIP surprisingly tops the group right now, but also surprising is that Heretics ist just 2 places behind them. Even though Heretics had a great start they still have to win one of two games in order to qualify for the playoffs.

This game falls in the same category as Heretics vs Astralis last week for me. If Heretics manage to win at least one map they offer a lot of great plays. The surprise of the tournament maka is still one of the top performers of the tournament even though he is coming of two losses. With twist underperforming for a long time now, who is the AWP player of NIP I can see having maka an insane game again.

The actual star Nivera continuously puts up around 200 fantasy points with the exception of last game. If you think Heretics will win a map he is definitely a solid member for your team.On the NIP side all players are priced in a price range of 0.6 million which offers a lot of value if you hit the right one. Even though they are a really balanced team slowly but surely Plopski and surprisingly nawwk are top fragging most of the games. I wouldn’t suggest them as a captain play but to fill your team they are great in my eyes.

The event is already filling very solidly, so get in your team here while there is still time.