After many of our picks could have helped you to have some top finishes and I myself made profit the last two days I am looking forward to my analysis even more.

The NA region is back included in the FanTeam contest which leaves us with 3 matches of the CIS region, 2 games of Europe and 1 quarterfinal of North America  to be covered.

It remains that the CIS groups are still in the beginning of their Road to Rio while the European teams play their second last game today. The NA region has already arrived in the playoffs which means: Win = you stay in the tournament, Lose = you are out of the tournament.

Most of the matches today are obvious affairs on paper. But as you all have probably seen there where many upsets already this tournament, so every underdog will give their best to win and try to qualify for the playoffs. Qualifying for the playoffs will give the teams a whole lot more RMA points, which is what every team is here for: Points to qualify for the major in autumn.

The matchups today will be the following: 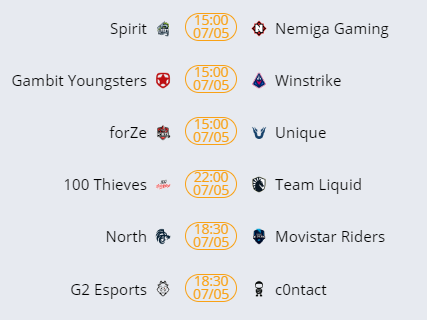 To make sure you can take advantage of this we looked out for the best value plays for under 11 million as usual. For the first time I will also write you down my favorite picks over 11 million in the last sentence, as these players have been the best captain plays for the last days.

As usual the first 3 matchups will be 6 CIS teams fighting off against each other.

The first one is straight the most exciting one in terms of the closest odds. Winstrike are the slight favorites here but any team could win this at any time of the day. Being the slight underdog the rising star sh1ro is priced at only 10,5 million which is way to cheap in my opinion as the Gambit Youngsters still stand a solid chance to win. If they win sh1ro will take part in a lot of rounds they are winning. He is yet to go insane this tournament, but winning would surely help and make him a good play.

If you think the Winstrike will win this match as most do there are 3 valuable plays for you.

The two young guns El1an and hobbit both show a really good performance so far this tournament with the exception of last match where the whole team got demonstrated against ForZe. They both have huge kill amounts here and there which make them a solid. captain pick. The old man bondik isn’t a captain pick for me, but an even better play to fill up your squad. He knows the CIS scene more than anyone else which allows have to have good performances against CIS teams constantly.

A fact that stand my picks is that all 3 players of Winstrike managed to get around 65 kills in their last matchup against Gambit Youngsters, even though they lost 2:1

The last time Unique contributed in a game I covered in an article I left the players of the game out, as I expected a blowout of the server which is bad for any player in the match in the current scoring system. As one player of the game was in the winning lineup I will change that today. It also feels Unique aren’t as bad as first thought but I still expect a 2:0 blowout again. So to be clear I still don’t love forZe players but I won’t leave them out to a 100% this time. I will probably mostly play xsepower, as he usually is their star player and has the best tournament performance so far but is only priced 3rd highest at 10.8 million.

Another option I consider is almazer. He offers great value as he is their second best performing player so far but is priced lowest by far. At a 9,2 million price tag he offers you 31,5 bonus points in comparison to their most expensive player FL1T which is a lot and can win you a tournament in the end.

On top of it almazer had the most kills in their last game against Unique, although this was more than 6 months ago.

I will completely fade Unique as I am quite sure they will lose 2:0.

The third game in the CIS region should also find their winner on the left side of the matchup. On paper Spirit is the clear favorite as they are the better team and in top shape coming of a streak of 2:0 wins. My favorite play today and the tournament winning player 2 days ago chopper is still priced lowest at his team with an absurd price tag of 9,5 million. He didn’t just have this 1 game performance, he is also the best performing player of them the whole tournament together which shows consistency and makes him even better. It’s hard for me to like someone else of Spirit as he is such a good play. To get some variety I will probably mix it up with iDISBALANCE and somedieyoung as they are both capable of putting up a great performance every now and then.

On the enemy side there is the star player lollipop21k who definitely deserves a mention as he is priced at 9,6 million. Nonetheless as good as he is individual I won’t play him often as there is a high chance his team loses 0:2 which would make him unusable.

Arriving in the EU games we start with a game where I am quite sure G2 will take the win 2:0. Skillwise there aren’t close in any way and on top of it G2 desperately need the win in order to qualify for the playoffs.

As I predict a one sided affair and every member of G2 has the potential to top frag a map I don’t love their players in today’s slate for these reasons. Nonetheless if you hit the right one G2 players will always deliver great points as high multikills and clutches are very likely.

nexas price and performance make me look away from the team circumstances as the in game leader averages 176 points even though they lost 2 games already. Being priced at 10,3 million with the potential of being the highest fragging member of any slate he has to be in some teams. The support player AmaNEk also deserves a shout as he is priced at 9,2 million which allow you a lot of bonus points. To justify his place in your team he also put up some solid numbers already.

I wont pick any c0ntact players as i clearly see them losing 0:2.

The matchup is a bit of a weird one. Before the tournament everyone would have said easy match for North. Then North struggled a hell of a lot and Movistar Riders exceeded their expectations by far. Now Movistar Riders don’t perform anymore and it is hard to tell who is in worse form.

All in all I wouldn’t be surprised by any result in this match which allows me to pick players from both sides.

North won their last game with a huge carry performance from aizy who definitely earned himself a spot in some of my teams today. The two maps they were winning he managed to get over 30 kills which helped them to comeback and win overall. Next to him MSL also deserves a shout as he has the team’s second best performance in terms of fantasy points so far but is priced lowest at just 9,6 million.

On the other side my favorite play is lowel. While his team falls he seems to be coming alive right now. The spanish AWPer picked up some form again und a win condition for them to win against North in my opinion. Considering that the AWP role on North isn’t clearly assigned as MSL suddenly seems to pick it up more than cajunB, he should have quite an easy matchup.

The last match of the day is a quarterfinal in the NA region and to be honest this could have been the final as well. Although it’s sad that one team has to leave this tournament so early we can also be happy to see such a great match today, so make sure you tune in and fall in love with Counter Strike.

Liquid struggled in the Group Stage which makes this to an almost 50/50 game for me. The odds still favor Liquid by far and 100 Thieves were not able to win against them for almost a year. Still the only matchup between them this year ended up in two overtimes which could have gone either way.

Looking at that match Gratiscation had the most kills for 100 Thieves. He is also by far my favorite play for them today. The struggle of their 2 stars jks and jkaem allowed him some great performances already and I am sure he is able to replicate that today for only 9,5 million.

On the Liquid side I am not confident picking one of the players under 11 million as the two above are doing everything for them since Twistzz does not find any form in online CS:GO.

But as I have announced before I will write down my favorite picks for over 11 million now and you will find one Liquid player there.

My favorite over 11 millon picks for today: Naf, kennyS, mir