Over a time period of nearly one month the worlds best teams will give their all for 260.000$.

Due to the Covid-19 situation the teams are forced to play from home which leads to the fact that the EU region and the North American region are battling off in two seperate tournaments.

Each day there will be two EU games and 1 NA game which FanTeam will cover in one tournament together each day.

With a tournament each day comes a preview article of me each day. I usually cover the days best value picks to give you the best chance of winning the tournament.

But I will also give you some tips for the first tournament in order to create a chance for you to win the 10.000€. Watching professional CS:GO is already one hell of a drug and to cheer for the players of your fantasy team makes it an even better experience.

You can enjoy the experience while winning some money? Sounds great to me, so make sure to not miss out.

How does fantasy CS:GO work?

You have budget available to build your team consisting of 5 real life CS:GO players.

These players will gain points based of a scoring system which I will present you shortly.

You have to buy these players of your budget. It is possible to buy the 5 most expensive players but you have to note that you get 15 bonus points for every million you don’t spend. This makes it a valid option to pick cheaper players as well.

Your chosen players will gain points following this scoring system: 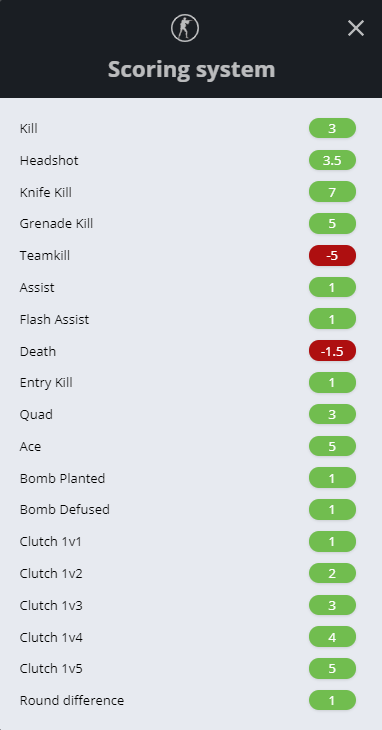 As you will notice shortly, the goal is to find players that get a high amount of kills and assist while at the same time have a low amount of deaths. Particularly precious picks will be the players that achieve 4 or 5 kills in one round, as well as the players that are able to win the round as the last survivor of their team.

Players that get a low amount of kills and die often should be avoided.

It is also worth to note that players on teams that win 2:0 instead of 2:1 and therefore don’t play a third map are at a disadvantage. To equalize this we created a Straight-Set-Bonus which will multiply the points achieved by players by a factor of x1,5, breaching the gap and creating a fair correspondence.

How does CS:GO work?

CS:GO is a first person shooter where each team consists of 5 members.

There are two teams: The attackers (Terrorists, also called T-side) and the defenders (Counter-Terrorists, CT). On every map there are two bomb spots (A and B), the goal of the attacker is to plant the bomb on one of these spots and make sure it explodes. The CTs have to prevent this.

If either all CTs are eliminated or the bomb explodes the attackers win the round. On the other hand if either all Terrorists are eliminated or the bomb is defused the Defenders win the round. Every map has 30 rounds, whoever is the first to reach 16 rounds will win that map. To become the winner of the match up a team has to win two of the three maps that are played.

After understanding the rules we should check this exact tournament, the Dreamhack Masters. In the NA region 8 teams will participate in 2 different groups. In each group everyone will play against everyone to determine who the best teams of each group are.

The playoffs will be played in a double elimination format with a BO5 final to end everything.

Exactly the same can be said about the EU tournament, with the only difference being that 16 teams will be competing in 4 groups.

These are the teams participating and the group constellations in which they will be dueling:

To end this article I will talk about the first day´s matchups and tell you my favorite player picks for this tournament.

On paper there are three clear affairs on tuesday, but everyone who followed the Road to Rio tournament the last weeks knows how easily upsets can happen in online CS:GO. 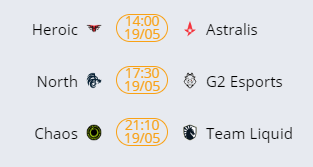 Talking about Road to Rio, both finalists of this tournament will be showing up on this first match day. While Astralis should have good chances in winning the danish battle against the nearly formed but promising looking Heroics, G2 should also have an edge against North who just recently replaced one of their star players Kjaerbye with the upcoming star kristou. Though they haven’t been able to practise much as they participated at Road to Rio until some days ago, so we shouldn’t expect much from them yet.

To finish the evening the NA Road to Rio winner Liquid will face off against Chaos, who just recently joined the tournament as they replaced Bad News Bears.

As I said all matchups look like a written story already, but you have to note that if an team can pull the upset you have to own one or two players from this team as they are priced much cheaper.

Looking at the Astralis players recent performances it is hard to judge by that, as everyone stepped up massively every now and then. Though the danish AWPer device has been putting up great numbers constantly and has the highest point ceiling as well. He can always get big multi kills which will gain him extra points. He definitely is a possible captain play,

Considering he is getting no bonus points as he is priced at 11,3 million and so it the most expensive player of the tournament I also like dupreeh. He is priced the second lowest of Astralis but has been stepping up especially in the last games of Astralis. At 10,2 million he is priced quite cheap and on top of it he will be low owned, which also gives you an advantage.

On the Heroic side b0RuP is my favorite pick. Surely the games they have played aren’t many and it’s a really small sample size, so anyone can be the best pick here. But b0rup has been performing quite well and only costs 8,5 million. Another advantage of him is, that he has one of the highest headshot percentages with 65% in the last months. A headshot kill gains your team 0,5 points more than a body kill. The points will sum up and this could be a small but great edge if Heroic can put up a fight against Astralis somehow.

In this matchup I also favor G2 players as most of you probably do. Especially nexa seems to be one of the best value plays of the tournament. The insanely skilled in game leader has been their best performing player throughout their journey in Road to Rio, but is priced nearly a million cheaper than their 2 stars huNter and KennyS. Especially as a captain he could be a tournament winning play. Next to the Serbian I also like KennyS a lot. He has struggled the past days in the Road to Rio. But with a 1 day break and one of the weakest AWpers in the whole pro scene, named MSL, as his enemy he is surely up for a great performance. And who knows, maybe he even finds his form in todays final against Astralis.

North on the other side is usually such a balanced team. With their new addition kristou it is even more unpredictable who steps up and who doesn’t. In the end I like aizy the most. The second star player has more room due to Kjaerbye leaving the team. On top of it they can’t be far structure wise as a team, so they will play more of a loose style where aizy can shine.

On paper the NA match is probably the most obvious one. On the one side Liquid has been struggling in the group stage of Road to Rio, but on the other side Chaos seems to be a caliber to weak in order to cause problems for Liquid.

If you want to go for someone on Chaos, what I wouldn’t advise you, go for Jonji. If Chaos wants to stand a chance he has to be the main man.

On the Liquid side Twistzz has slowly begun to find his form in online CS:GO. Many people who played a lot of Road to Rio fantasy might not know what he is capable of so I think he will be a low owned pick which is good for you. Next to him Elige is always worth a shout. He performed extraordinary well in the last games of Road to Rio and I want to pick him just because I would fear my enemies owning him while I don’t 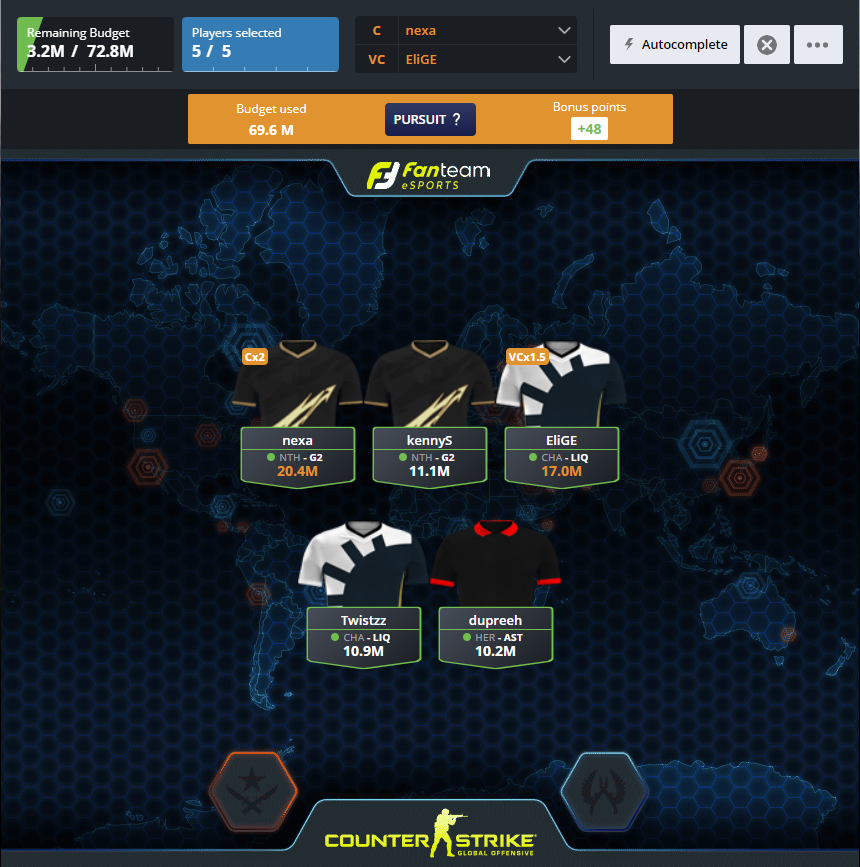 Following my favorite picks this could be a potential team. As you can see this team would get 48 bonus points simply because I haven’t used all of the budget.

In the end I can just wish you a lot of fun with the beautiful experience of fantasy CS:GO.

If you have any questions regarding the article, the tournaments or don’t want to miss future articles check out my https://twitter.com/_thaics