How to build my team for a close match, where both teams score?

In our previous articles, we covered other popular DFS Strategies like How to use odds to predict matches like a pro, and How to draft for a match that promises many goals. In this one, we will teach you how our best players draft their teams for the matches they predict will have a match where both teams score.

Which are the best Pursuit 5 Tips for a draw match?

This strategy is applicable for matches that you predict to end up 1-1, 2-2 or more.

In this case you should pick players from both teams.

Your main goal is to predict the goal scorers and the players that will get assists.

Which formation to use in Pursuit 5 – Single Match Contests?

As we already said you have to avoid taking defenders and goalkeepers and focus on midfielders and forwards.

The best formations in this case, would be:

As we expect both teams to score we are focusing on drafting midfielders and forwards, because they have some advantages, such as:

Which players should I choose?

As we said above no goalkeeper!

No defenders either. Gambling with one defender who participates in the attacking front might make sense, but if they don’t score you are in a serious disadvantage.

For the midfielders, you need to pick the players you believe will score or get an assist.

Keep in mind that Midfielders’ goals count for one point more than a Forward’s, so if you are between a Midfielder and a Forward, lean on the side of the Midfielder.

Cheaper midfielders give you a higher pursuit bonus. If two midfielders both give an assist, then the cheapest one will do much better. You might also want to consider that in your draft.

Finally, a big factor for a close game is the extra point, if your players finish the match. Attacking midfielders tend to run a lot, and coaches usually replace them for some fresh legs. Playmakers and Defensive midfielders, though, don’t exit a close game.

If you predict that the game score will be higher than 1-1 you should aim for those players that have higher chances to impact the game.

Here are some combinations for 2,3 or 4 midfielders: 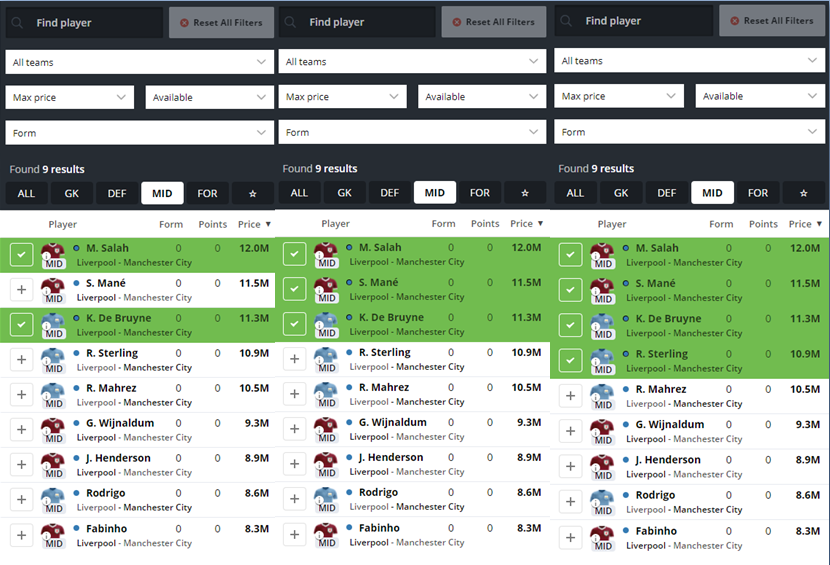 In a 1-1 draw, you should expect there will be 2 goals and 2 assists. Obviously, the goals and the assists will be divided, so the best strategy is to pick the two players from each team that will score the goal and the player that gave the assist. As for the 5th player, you need someone that usually plays the whole match. Remember, the cheaper the player is, the more bonus pursuit points you get, so try to pick someone cheap.

Usually, the forwards tend to score the goal or give the assist. You will have to pick one, two, or three forwards that will have a high impact on the game. Try to prefer the top Forward from each team, as the cheap ones usually get replaced mid-game.

Who to Captain and Vice-Captain?

In addition, one of the most valuable Pursuit 5 – Single Match Contest Tips we can give is the selction of your captqain. Captains & Vice-captains score more points, but also cost more! (Captains x2, VCs x1.5) But, in a game where both teams score you have to captain the top goalscorer.

You should captain the player you expect to score the goal/goals or give the assist/assists.

The pursuit bonus is definitely important here. If you choose a low priced player for captain and he scores, then you have very good chances to win the tournament.

As for the Vice Captain you should go with the next player that you predict will score high, the second goal scorer or an assist giver.

The key takeaways for your Daily Fantasy Strategy on How to build my team for a close match, where both teams score:

Leave your feedback for Pursuit 5 – Single Match Contest Tips in the comment section below. If you liked the content and want more of it, make sure to hit the like button below!

Subscribe now to receive all our new strategy articles directly to your email!