Who takes penalties in the Champions League will be one of the key questions to win the €250K Champions League Group Stage [€50K to 1st]. Penalties have been a very large point of discussion this season. With new handball rules and different implementation of VAR in the Premier League, to some viewers it feels like there is a penalty being given every game they watch.

Who takes penalties for each team in the UCL? (1st & 2nd seeds)

At the time of writing this article, there have been 25 penalties given in 38 games. That’s a penalty in 66% of all games. Personally, as a Brighton fan still reeling from the penalty given after full-time; it feels like a matter of WHEN, not IF, a penalty will be given.

One of the biggest points of contention has come from the “new handball rule”. The Premier League was instructed to act in line with the rest of Europe with regards to how they handle certain handball cases. Dale Johnson (@DaleJohnsonESPN) has been talking about it a lot on twitter and produced the following graphic:

Since the introduction of the new handball rule, there was a noticeable increase of penalties awarded. The league most important to us, the Champions League, has also increased a good amount since the implementation. 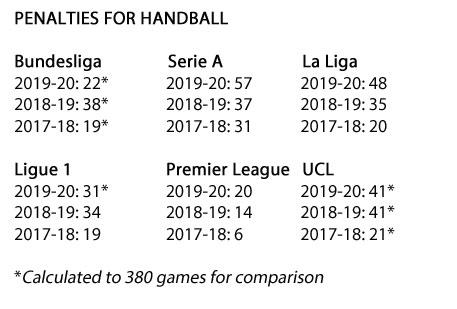 One interesting thing I found before we get into the juice of the article, the penalty takers, 25 of the 37 penalties were awarded to the home team; only 12 to the away team. Of course this is a small sample size, but I found it quite a curious discovery and definitely something to bear in mind.

Probably the simplest selection of the lot. Lewandowski is an absolute goal scoring machine. He scored a mind blowing 15 goals, with 6 assists, in only 10 Champion League games last season. That’s 2.1 goal contributions per match. Since the start of last season he has scored 9/9 penalties taken.

There is a slim chance he lets someone else take the penalty, having done so with Coutinho last season, but in the UCL I believe he’ll have them all to himself.

Ramos is possibly the only nailed defender to have penalty duties this season in the UCL, fully justifying his 7.0m price tag.

Since the start of last season he has netted 7 out of 7 penalties taken. Even though he does occasionally share duties with Benzema, this is normally after Ramos himself has scored a penalty in the same game, making him the Madrid man to own.

Oh how I wish I could be more helpful here, Telles why did you have to leave!? This is what happened with Porto while Telles was not taking the penalties last season:

This leaves me with a tangled web of Marega maybe being the penalty taker, but it could easily be anyone else. Might have to wait and see on this one.

Luckily for us, this one is fairly simple. Milner is actually the primary taker, scoring 3 of his last 3, but he is rarely in the starting 11 anymore. Salah has put away 5 out of 5 of his last penalties and should continue to do so in the UCL this year. At 11.0m I think he could be a great option for your teams.

Another simple one here. He scored 6 out of 6 of his last penalties and doesn’t look to be losing them anytime soon.

He could be a great option for your team in the early gameweeks, facing both Rennes and Krasnodar at home in weeks 2 and 3 respectively.

Generally speaking the top teams have a very concrete penalty taker and for Zenit, it’s the same story. With a great record of 10 scored in his last 10, he looks a great option to start the competition. Playing Brugge in weeks 1 and 5, he could fit nicely into many sides with more difficult fixtures those weeks.

The man, the myth, the legend. Some say he gets his girlfriend to sing the Champions League theme to him as he falls asleep. Since the start of last season he has taken 17 penalties for Juventus, scoring 15 of them.

After Cavani conceded penalties to Neymar last season, he has scored 4 of the 5 taken. Mbappe took the most recent penalty for PSG but it’s promising to see that Neymar was not on the pitch. I believe he’ll continue to take them this season and with each penalty worth 5 points as a midfielder, he could be a fantastic shout for your sides.

Although Niguez has taken one in the league this season (missed), I believe Suarez will be the one to step up to the plate now that he has made his way into the Atletico side. Atletico had a season riddled with penalty problems which forced them to resort to Trippier taking one in the Champions League last season (missed).

Suarez has a decent record across his career for penalties, taking 51 and scoring 42 of them. He also took 2 for Barcelona last season.

Unfortunately this one is another mystery right now, with Shakhtar having 3 separate takers in this season alone.

Having said that, I fancy Taison and Patrick to rotate them between them, and for 5.0m and 4.5m respectively you can’t go too wrong for a side expected to win some games in their group.

Manchester City had a whirlwind season last year as far as penalties were concerned. They rotated through 6 takers and at one point even missed 4 penalties in a row.

Eventually Kevin De Bruyne stepped up to take one, and he hasn’t missed since. De Bruyne has a solid record of 5/5 from the spot, something you’d expect from a dead ball specialist.

However, I don’t believe it to be as cut and dry and it appears. De Bruyne has never taken a penalty with Aguero on the field and historically he was always the one to take them if fit, so keep an eye open for this one.

Ajax and Tadic keeping things simple for me here, he’s 6 out of 7 from the spot since the start of last season and I expect him to remain on the kicks this season. At 6.5m he could be a great enabler in Ajax’s easier matches.

Things remain fairly simple at Chelsea too. Jorginho has hit 8 out of 9 penalties with his famous hop technique. There is a good chance that he doesn’t start some of the games this season, with some speculating that either Werner (9.0m | For) or Havertz (8.5m | Mid) will step up to take them in his absence.

Reus appears to be the primary taker for Dortmund this season. He scored 1 of the 2 he received last season. He hasn’t played many minutes so far this season, causing Sancho and Haaland to step up to the spot.

Whilst Sancho did take one, I don’t think the game was of much importance and believe Haaland to be ahead of him in the pecking order. It would not surprise me if Haaland was to win them off Reus this season too.

Things are very simple at Barcelona, with Messi taking on the responsibility of hitting it from the spot. He has scored 6 in his last 6. Time will tell how this season will go for him after the transfer saga of summer past. At the time of writing, he has only netted once in the league so far; luckily for us it was from the spot!

The penalty taking situation has finally calmed at Manchester United. Last season we had rotations of Pogba, Martial and Rashford. Finally, they’ve found a gem in Fernandes.

Since arriving at United, Fernandes has scored a very impressive 10 out of 10 penalties for the Reds. And the Reds LOVE getting penalties. United have earnt 16 penalties since the start of last season in the Premier League alone!

Many expect this penalty gather rate to continue due to certain styles in the way that they play, but only time will tell!

At 8.0m, and 5 points for each penalty goal, Fernandes could be a fantastic shout for your teams.

That concludes the penalty takers for the 1st and 2nd seeds, it felt a long one! In the next article I will be analysing the 3rd and 4th seeds to try and find the bargain penalty takers that we’re all looking for! Hopefully we’ll be able to find a 4.0m penalty taker to put on our bench and wait for their time to shine.

Thanks as always for reading, I hope it was of some use to you all! If you would like to ask me any questions or suggest things for future articles please feel free to find me on twitter here:https://twitter.com/Ramorey_FPL

Until next time, good luck in your fantasy ventures!