Fantasy Strategy Basics: How to avoid injuries and early substitutions of your players

Picking a Fantasy Team is really exciting and hard. But the first thing you have to do is to be almost certain that your players will be in the starting line-up and they will not be substituted early in the match. Especially for the new managers, it is hard to know which players are playing and which of them might be suffering an injury. A fantasy tournament is tricky for multiple matches and you can’t be sure for the starting line-up of each match.

You have to build your 11-player roster from players of 9 matches.

What do the colors next to each player’s name mean?

Firstly, you can easily avoid injuries and early substitutions of your players by looking closely at the interface. Each player has a color next to his name. That color has a meaning. 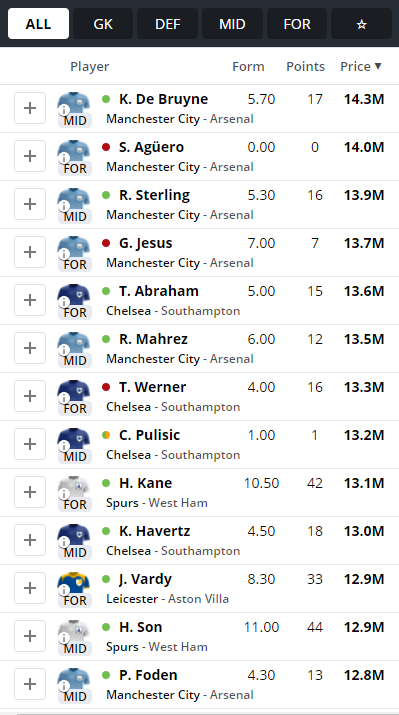 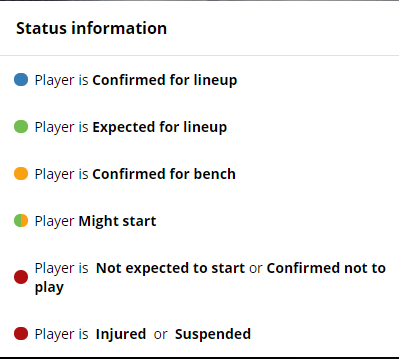 1. Prefer picking players from the confirmed line-ups (if any)

The first match is starting when the tournament starts so you can be certain for those players that are in the starting line-up. The line-ups usually are announced one-hour before the game. So, you can draft your team when the starting line-ups are confirmed or you can check your team if you have a player that is not starting. It will take some time because you have to pick many players, so it’s better for you to try to build a roster early and check your players for any last-minute changes.

2. Choose players (with green color) that are expected to play

You must definitely avoid the players you see with red color. It means that they are probably out and it’s not worth the risk of choosing them. It’s better to choose a player that you are almost certain that will be in the starting line-up. It is also better to avoid players that might start (green/orange color) and focus on more solid picks.

3. Check your team for any changes in the status of your players

Every day and especially Friday and Saturday morning there is more information and updates about the players that are rendered as favorites for the start-up. Due to the pandemic, every day renders the possibility for new affections. Let’s assume that you built your roster 3 days before the deadline. The next days, it might be announced that one or even more than one of your players won’t play or will be demoted to a ’’might start’’ status. The best thing to do is to check your team for any updates. The last hour of the deadline is the best time to check that out.

How to avoid players that are substituted early

1. Try to avoid a player whose condition is ambivalent due to a probable injury.

Even if the player starts playing, he has a high chance to make his injury worse. Furthermore, he might have lost some crucial practices during the last few days and will not be in the best condition to handle playing the whole 90-minute game.

2. Check how many minutes he has played in the latest matches

On the Player information page as well as on the History page, you can see how many minutes he has played in the previous matches. For example, Kevin De Bruyne played every single minute in the last 3 games. This means that his role is crucial in the team and his manager usually prefers to substitute someone other than him.

Sometimes, seeing that a player has played many matches in a row in full (like Kevin De Bruyne below could mean that he’s highly fatigued compared to his other teammates. In this very intense season and with the Champions League games coming up, his manager would like to keep him well-rested. For that reason, if the team is playing a comparably “easy to win” match within a tough array of matches and is winning early in the game, we would expect the key player to be substituted early on in the game.

Most of the fantasy tournaments offer the possibility to activate the safety-net enable. A safety-net means that a non-starting player will be replaced at the beginning of his match. He will be replaced by a player from the same club, in the same position, with an equal or a cheaper price. The player closest to the arranged price range will be chosen first. If you chose for example Kevin De Bruyne in your team and he does not start playing, the next in line – cheaper starter will take his place. You have to avoid the cheapest player in any position of a team if you are not certain that he will start the game so that the safety net will get enabled if your player doesn’t start in the match.

If it is not certain that a player will start and he is in the starting line-up, then he will take the place of another player that is expected to start. Let’s check out the example of Manchester City’s defense. As you can see below, there are four players that are expected to start and one player that might start. If Nathan Ake will start, he will have to take another player’s position. Ake is center back, so he will take the position of another center back; probably Aymeric Laporte’s place or Ruben Dias’s place. In that case, if you pick Ruben Dias and Ake takes his place, then you will play without one of your players because the safety net will not be enabled. So, the best choice is to pick Laporte or Ake and if someone will not start then the next defender will take his place. 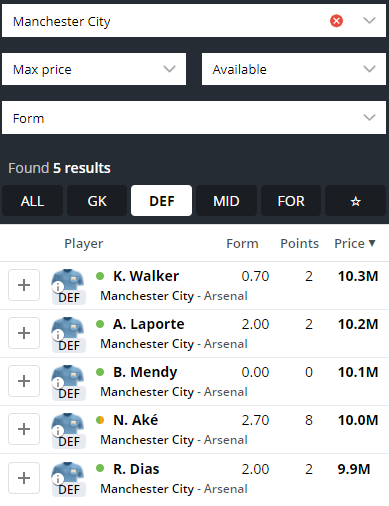 Nikos is a fantasy sports enthusiast, active in daily and season-long contests. Football, Formula1, and NBA are his favorite DFS games.
A poker and engineering background helped him apply game theory to understand the games on a deeper level. He enjoys applying & analyzing underlying strategies to convert them into beginner-friendly tutorials.