If you’ve been tempted to dabble in the Weekly Monster for a while now then this is the week to do so, as FanTeam have doubled the prize money! That means that first place is going to walk away with an amazing €10,000!!

The Importance of nailing your Captain

As you already know from playing Fantasy Premier League (FPL), your Captain gets double points and can improve a mediocre week to a great one. In the Weekly Monster it’s even more important, as you’ll struggle to finish in those crucial cash positions without a reasonable score from your Captain.

Like FPL, in FanTeam the points mainly come from goals, assists and clean sheets. You don’t need to dig out the stats on number of crosses or completed passes. It’s nice and simple.

However, what you might not be fully aware of is that the players don’t get bonus points, which can significantly change the dynamic. Instead, an impact point is awarded if a player ‘wins’ the period they’re on the pitch and they (midfielders and forwards) also earn another point if they play the full match.

So why is this important?

In a game like this, an additional one or two points can be the difference between finishing in the money and coming away with nothing. Therefore, captaining someone that is likely to win and play the entire game should lead to an additional four points. That means there’s less incentive to take punts on players in fixtures where it’s unclear what the outcome is going to be.

Unlike the main game, the deadline isn’t until kick off, so you can take advantage of any early team news. However, don’t worry if you can’t be around for that time. Anyone that doesn’t start will be automatically replaced with the closest equivalent teammate e.g. if Salah doesn’t play you will get Mane. This happens immediately though, which unfortunately means that if the player you selected comes on at half time and bags a hat trick then you won’t get their points.

Weekly Monster Gameweek 21 – Which fixtures to target for Captaincy?

Manchester City v Sheffield United – it turns out that De Bruyne was holding City back and they absolutely destroyed West Brom. Sheffield United desperately need points if they want to avoid going down, so they will have to try and win this game, which will leave them wide open. However, the last three games between these two sides have been relatively tight with City winning 1-0, 1-0 and 2-0.

Leicester v Leeds – Leeds always leave themselves wide open and Leicester thrive against that type of opposition. They won the reverse fixture earlier in the season 4-1. This time they won’t have Vardy, but there’s a strong chance that at least one of their attackers will return here.

Brighton v Spurs – Brighton don’t tend to get blown away, but they do concede a lot of soft chances. Spurs are the type of side that can punish them. 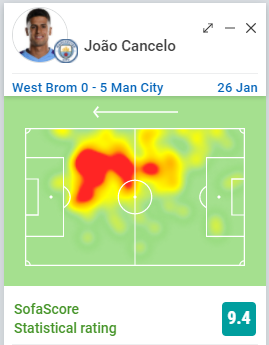 He finally hauled recording a 16-point return against West Brom thanks to a goal (offside), assist and a clean sheet (CS). Lightening doesn’t tend to strike twice, but a CS looks likely and they’re going to win, which should give him a floor of seven. If he adds just one attacking return that should lead to another double figure score. Although he’s classified as a defender, if you look at his heat map from SofaScore you can see that he played more as a centre midfielder than a right back. Furthermore, he made the most key passes (3), through balls (2) and entries into the final third (16) than anyone else on the team, making him the most creative player in the absence of De Bruyne.

We’re doubling on City this week, as ultimately, they’re the best attacking side by a mile playing against the weakest side in the league. As detailed above, you would expect him to benefit from the CS and impact bonus. However, such is his importance to the team that it’s unlikely he will get the 90-minute bonus (he still picked up 12-points in 52 minutes), as he will be wrapped up in cotton wool as soon as victory is secured. Other than Sterling, he offers the most goal threat in the team. He’s demonstrated far better finishing and has that knack of timing his runs into the box to get the goal scoring chances. When you also factor in that he’s the penalty taker then it’s highly likely that he will return.

The last two games between Spurs and Brighton have ended 2-1, so I’m not expecting a goal fest. However, if Spurs win in that scenario then Kane will pick up his 90 minute and impact points. He scored in the reverse fixture, he’s on penalties and he’s the most creative player on Spurs, which means that he has several avenues for points (his team goal involvement over the last six games is 50% [Son’s is 38%] prior to the Liverpool game).

Although Maddison is the one showing form, Pérez is likely to play up front and Tielemans is on penalties, I think Barnes offers the most upside. Other than Vardy he offers the most goal threat and he scored against Leeds in the reverse fixture this season. Son dominated Leeds when Spurs played them in Gameweek 17 and they appear vulnerable from their right, which is ideal for Barnes.

Article written and published by @ChrisTanFPL