If you’ve been tempted to dabble in the Weekly Monster for a while now then this is the week to do so, as FanTeam have doubled the prize money! That means that first place is going to walk away with an amazing £9,000!!  To get the most out of this article you need to read our Key Concepts.

It’s easy to look at the fixtures where the top sides play the weaker opposition to predict a clean sheet (CS). However, these are usually the games where you expect a lot of goals, you can only hold three players from a single team, and you don’t want to waste valuable slots on a defender. Also, the players from the strongest teams with the best fixtures will be priced accordingly and you won’t be able to afford all of them.

Yes, they’ve just been spanked, however City are unplayable when they’re on song. Big Sam hasn’t instilled any real defensive solidarity yet, but this is as good a time as ever and they offer exceptional value. Fulham have one of the lowest xG per game (1.12) over the last six Gameweeks (prior to the Brighton game). 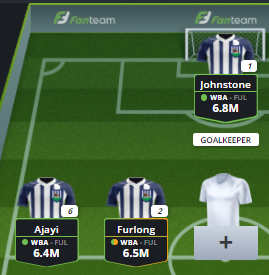 Ajayi is a real threat from the air and has scored two goals already this season. Furthermore, Fulham have conceded the fourth most headed attempts (15) in the last six Gameweeks (prior to the Brighton game).

First, I earmark the fixtures I think will result in the most goals and then I consider which players are most likely to combine.

All three players have excellent goal threat, especially Gündogan. Furthermore, Cancelo and Silva constantly link up on the right-hand side of the attack. These are three of the most creative players on the team and they’re highly likely to be involved in any attacking returns. 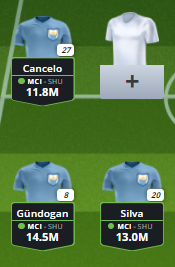 Tielemans is the penalty taker, he scored two against Leeds in the previous meeting this season and only three sides have conceded more penalties than Leeds (6) this season. Maddison is on fire, not only is he the creative outlet on the side but he’s starting to score. However, when it comes to pure goal threat, Barnes has the most potential to explode.

For Spurs it’a only ever these two that I’m interested in. The majority of goals come from one of this pairing with the other assisting and it’s always worth combining if you want to select Spurs players to compound any attacking returns.

Southampton have been excellent this season, but without their first-choice fullbacks they looked vulnerable against Arsenal and this is the type of occasion that Villa could really punish them. Grealish is their creative hub, his mate Barkley is the link man and Watkins the spearhead. If Villa score any goals, it’s highly likely these three will be involved and they’re priced well enough to take a punt on. 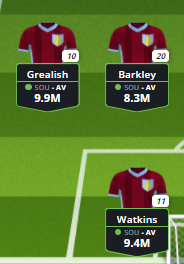 Article written and published by @ChrisTanFPL