We have boosted the guaranteed prizepool to €75,000 this week. You have an opportunity to walk away with €7,500. To have the best chance of doing so, you need to nail your captaincy. 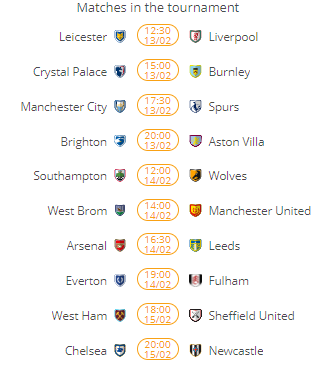 Weekly Monster Gameweek 24 – Which fixtures to target for Captaincy?

West Brom v Manchester United – West Brom are effectively a Championship side, and they’re so far behind in the league that they need to go for wins rather than draws now. That means they have to attack and United will tear them apart.

Arsenal v Leeds – Arsenal have dipped in form recently and Leeds will be a difficult game, however they do have a tendency to be exploitable and Arteta will be well aware that they don’t change their style of play.

Chelsea v Newcastle – Newcastle have a mini injury crisis, yet Bruce is determined to play attacking football. Tuchel’s Chelsea keep more possession that a Guardiola side and are highly likely to keep a clean sheet (CS). He’s also identified how to utilise Werner (14.2M) and this is the ideal game for Timo to regain his confidence.

I originally pencilled in Everton v Fulham, however it looks like Calvert-Lewin has picked up an injury in the FA Cup.

I expect United to win, which means Bruno will get an impact point, probably a clean sheet (CS) and he’s rarely substituted off (which means three points before any attacking returns). West Brom haven’t kept a CS in the last six Gameweeks, they’ve conceded an average of 1.93 goals per game and you’d expect Fernandes to be heavily involved in any goals United score.

This is very much a fixture vs form choice. He won’t get many easier games to break his duck though.

I tend to prefer captaining midfielders in FanTeam because of the additional goal and CS points. However, Leeds can occasionally concede a boat load of goals, as Bielsa will never adjust the way they play and that means there’s always the potential for a hammering. Lacazette should spearhead the Arsenal attack and if he doesn’t start, the ‘safety net’ will kick in and you’ll get Aubameyang (11.9M) who I’d be equally happy with.

This article is brought to you by @christanfpl.