This weekend we’re running a special promotion and have boosted the prize fund to €75,000 to give you the opportunity to walk away with €7,500. To have the best chance of doing so, you need to nail your captaincy. 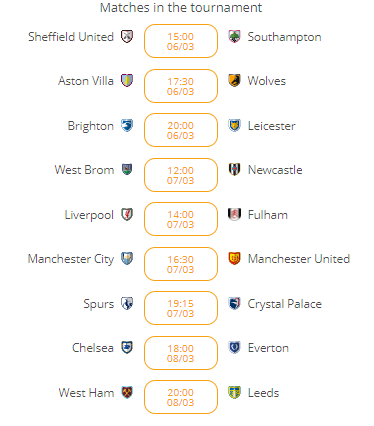 Weekly Monster Gameweek 27 – Which fixtures to target for Captaincy?

As mentioned in previous articles, you get an extra point for a win, so we want to be targeting winnable fixtures for our Captain. The three that catch my eye are:

Spurs v Crystal Palace – Mourinho has finally unleashed his attacking players and Palace are effectively going to park the bus, so this should be a one-sided game. The previous games at home have ended 4-0, 2-0 and 1-0 so history is certainly in their favour.

Liverpool v Fulham – Fulham are a reasonable side, and they’re difficult to beat. However, Liverpool has to win to stay in the top-four race and that means they’re going to be attacking Fulham hard, which could potentially lead to some fantasy points.

West Ham v Leeds – although this is far from a clear-cut winnable fixture, games against Leeds are always worth considering because of their approach. They will never opt for damage limitation, which means that there’s no ceiling on returns if they’re having an off day.

I expect Spurs to win, which means Kane will get an impact point, and he’s never substituted off (which means two points before any attacking returns). He scored in the reverse fixture this season, and he’s the penalty taker. The introduction of Bale has enabled him to spearhead the attack again, which is evident by the fact that he’s averaged the most shots in the box on the team over the last six gameweeks. Furthermore, Palace are likely to deploy a low block which will limit the space for the counterattack and the game should suit Kane more than Son.

Liverpool need to win this game and Mane rarely comes off before full time, so that should be two additional points prior to any attacking returns. Salah appears to be out of favour, he’s been deployed wider than usual and was pulled off after 60 minutes against Chelsea. Mane is playing very central and is becoming the focal point of their attack.

Leeds struggle to defend set pieces and headed attempts. They also concede the most chances from the centre (29) compared to the left (18) and right (19). Positionally, Antonio is best placed to exploit their weakness. West Ham has had the week off, so you would expect him to play for 90 minutes too. I would also advise compounding this pick and adding at least one of: Cresswell (£8.0M) for his set piece threat, Soucek (10.4M) for his aerial threat and Lingard (10.2M) for the combination of goal and assist potential.